From the Design Operations Summit website:
Science orgs typically lack designers and for good reason; there is no product. The focus is on data. The currency is discovery. Why spend money on a designer when we need to buy a new microscope? So how do we create a better experience through design for science?  In this talk, Mark will outline his approach to operationalizing design in science orgs, first in CERN and now at the European Molecular Biology Laboratory.

In the past, he worked in mature media organizations.  Working with scientists is quite different than that, or than what most of us do in technology companies.  CERN is the nuclear physics laboratory in Geneva, Switzerland.  There are four massive machines to fire protons together.  Then they smash them, and watch.  They were preparing for a new discovery that would change the understanding of the universe, they needed help with their website.

On the day of the announcement it was bedlam – mostly physicists and students.  There were two experiments, and the big announcement was coming.  Their findings were – in short – that Einstein was right.  People were crying … 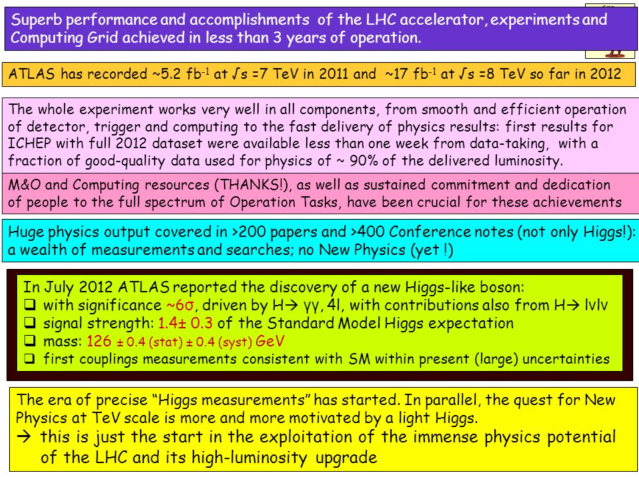 And he cried when he saw their slides – This was an announcement on a planetary scale.  It was an amazing day.  “What’s with the shit slides?” said a famous phycisist on Twitter.

Now he works at EMBL (European Molecular Biology Labroaty).  The flagsship site is in Heidelberg.  They create a really good environment for great, fundamental science to happen.  Understanding the very building blocks of life – removed from commercial concerns.   Each site has a research group that focuses on a particular area of biology.  They are like a cross-functional delivery teams.  There are groups coordinated across sites, and then there are a wide variety of services – ordering a mouse, or a worm, or a complex web application.

There is a lot of proper, hard-core science going on.  So, it’s complicated.  If you strip away the flies, mice, worms, it does look a lot like other organiations.  There are some fundamental differences in the environment:

There is no bottom line, no profit.  They don’t exist to make money.  There are no shareholders, it’s not publicly held.  Success is not shipping.  Success is delivering great science; it’s in udnrestanding, discovery, and publishing.  And, continued funding.  EMBL gets it’s money from the EU, so there is a role for diplomacy, too.

Status quo in the organization is protected.  A lot of those research groups are funded exgternally, from somewhere in EU.  Anything that gets in the way of a person doing that science could be perceived as a threat.

Bottom Up.  Even the director general said they are bottom up.  There is no top down heierarchical guidance on where things should go.  He doesn’t have yearly objectives; that doesn’t exist from a leadership perspective.  Leadership is almost entirely concerned with ongoing funding, creating an envionrment for great science to happen.

Publishing is the output.  No-one is going to give him the help to interrupt their science for his efforts.

He has worked with a couple of academic institutaions, they are similar in some ways.

As a community, we like defining the work we do – Jarel Spool, Jacob Neilsen, others.  How about simplifiying to None > Some > Integrated?! 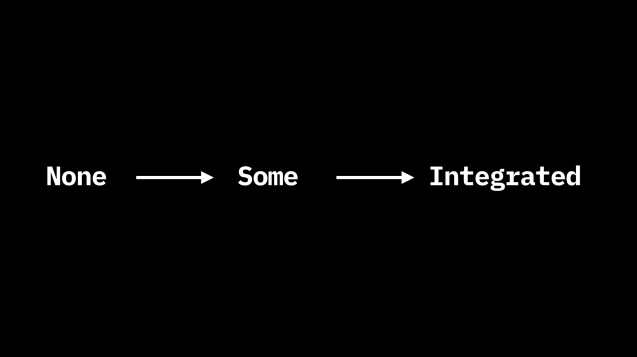 You could map DesignOps on top of that.   But what if you are never going to get up that maturity model?  Organizations like EMBL and CERN will never have hoards of designers, because design is not the thing.  Science is the thing.

There are people in EMBL and CERN making loads of digital things every day of the week – hundreds of people, making thousands of things.  We don’t call them designers. 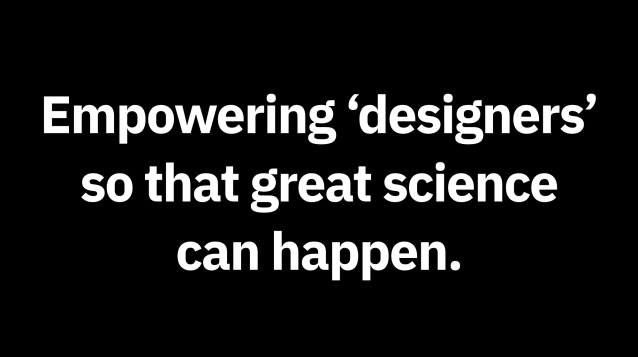 If you think about it that way, their design team was 500+ people making things.  THat is a scale problem.  So, how do we communciate the value in that context?  It is not an optimal place to succeed.

Marginal gains.  More of a philosophy – the aggregation of marginal gains.  Dave Brailsford runs the professional cycling team.   He wanted to win the Tour de France, clean.  Peformance enhancing drugs give 10-14% gains, so that seems insurmountable. He was the performance coach for the Olympics, and they had fantastic outcome – France accused them of having “magic wheels”.  So, they did it in two years and not five.  They analyzed the minutes around the athletes’ life, things like nutrition.  Riders sleep terribly in the hotels.  So, they brought ther own mattresses, pillows … they made small improvements across the whole system.  He and his team believe that if they make tiny, inconsequential changes across a system, it will aggregate to something better than what we have now.

Bruce Lee.  He was a martial artist, but also a philosophy major.  When he broke his back, he wrote a book about his ideas about martial arts. At the time the practice of martial arts was very clinical, very isolated from reality.  He wasn’t interested in that approach.  Because “All fixed set patterns are incapable of adaptability or pliability. The truth lies outside of all fixed patterns.”  They tried a lot of different things.  Including poster sessions and beer sessions, to see what sticks.

Understand the culture you’re operating in.  Science exists in an environment of debate.  It’s encouraged – debate and scrutnity is part of the DNA of the organization.  The mechanism at EMBL is committees. Should he try to make an organization of thousands stop using committees?  No.  Go with organizational culture rather than against it.

Audit the pain.  People are focused on bioinformatics, they don’t want to struggle wieth CSS.  You have engaged people if you can help them where it hurts.

Cross-cutting.  They are in the communications team, which works across the organization.  90% of his job is talking, that is actually his job.  His norm has changed.

User insight manager.  They can’t call user researchers that – they will be set up for absolute failure if we talked about them in that way.

In summary, how do we think about DesignOps differently if we change the definition of designer? How do we help many more people make great things?

1 Comments on “Ops without Designers”