One of the many fun things about the Enterprise UX conference is that quite a few of the attendees are active on Slack.  Through that channel, there was additional content and many interesting ideas shared over the course of the conference.  I collected some of the ones I thought would be most relevant to a group that didn’t have a chance to attend the event.  And I also pulled out some of the websites that were referenced in speaker talks (though I am sure I missed some!).  You can find what I collected below.

XPLANE worked with the EUX team to create a visualization of the conference themes, which we had a chance to review and edit as part of our time together: 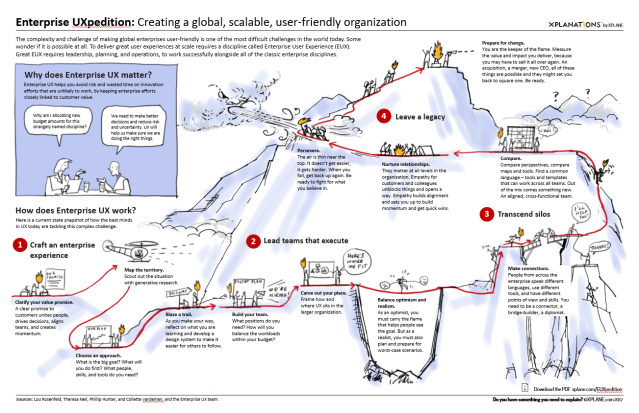 They used a.nnotate.com for digital feedback as well.

There were workshops preceding the conference this year, and those Slack channels were visible to all attendees for those who had time to take a sneak peek.  From the Designing Design Organizations workshop, I read an article about “Spotify’s shift to bring User Research and Data Analysts under the same umbrella to create the Product Insights team”.

On Slack there was also a brief discussion about Dual Track Development (where Discovery is acknowledged as a separate activity on a different cadence).

From Ross Smith during the Transcending Silos theme, here is the news story about Joshie the Giraffe.

During her Transcending Silos talk, Ariel Kennan talked about resources that they have made publicly available to raise awareness, help accelerate their own mission, and offer a public service:

During the Creating a Legacy theme, Sam Yen described some of the resources that SAP is making available to the broader community:

The design course for non-designers has been the most used resource of those they have made available.

Here is a link to Citrix’s 2001 vision video called Virtual Workplace that Mark Templeton shared as part of his closing keynote called Creating a Legacy: The Ultimate Experience.

Last but not least, here is a link to all of MJ Broadbent’s sketchnotes, which are now also available on the conference website.

← Creating a Legacy
Start with people →