Every day I read more news about toxins in our environment, and the growing body of research that makes the connection between these (largely unregulated) chemicals and a variety of insidious health conditions.  I feel like Americans generally don’t understand the seriousness of the situation, and how much corporations affect our environment and ultimately our health.  I do have some hope that the press about Flint Michigan will help, but that is far from the worst of it.

If we just look at lead as one well-known contaminant, we begin to see how very difficult the situation is.  The reality is that – in spite of the fact that the US government collects data on lead poisoning – many states don’t report lead levels in water at all: 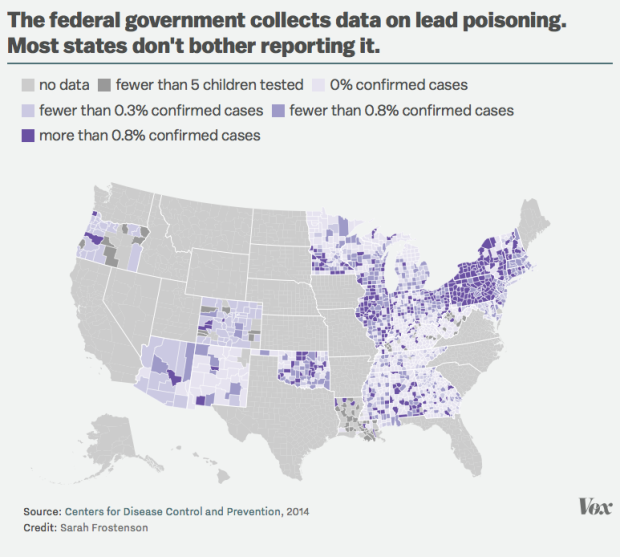 Given the publicity related to the lead poisoning in Flint, maybe consumers will start to pay more attention and start to demand this information.  But, according to the comments in this post, there are 160K water systems in the US, regulated by a wide variety of local agencies.  And the most recent version of the Safe Drinking Water Act has a loophole that avoids any EPA accountability for issues in drinking water that result from fracking.

In the meantime, you may recall the movie called Erin Brockovich starring Julia Roberts, which came out in 2000.  The movie tells the story of how Erin and her husband fought and won a huge lawsuit regarding the presence of Chromium-6 in the water of a local community.   Apparently it causes cancer even at very low levels of contamination, and it is now in the drinking water water of an estimated 200 million Americans in all fifty states.  But corporations and our own government agencies resist meaningful regulation because changing work practices (and of course the clean-up) are onerous and expensive.  If that sounds discouraging, keep in mind that today, the legislation that does exist regarding C-6 is the “only enforceable drinking water standard at either the state or federal level”.  That just goes to show you how far we have to go with lead, which is more widely recognized as an issue of late.  But it’s only the latest in a long line of unregulated industrial chemicals taking a toll on our health.  Erin Brockovich continues her efforts to fight for the safety of Americans against these toxic substances.  If you’re interested in learning more, you can follow the newsfeed on her website or on Facebook.

Part of the reason that I’ve been so interested in these issues is that in the summer of 2015 (six months after my Hashimoto’s Disease diagnosis) I had received lab test results from Doctor’s Data that revealed I had lead and mercury poisoning:

As you can imagine, I was pretty panic-stricken about it.  In hindsight, it seems likely that the mercury was from amalgam fillings that were not properly removed.  I had them removed shortly after my second son was born, which was also the earliest onset of my Hashi’s symptoms.

Humans do store lead in our bones, and for women, those reserves begins to release as women approach menopause.  My my doctor was very concerned about my levels being so high before the onset of menopause, so she recommended a number of concurrent treatments, including regular DMSA (a chelation agent) and a product called Zeolite (which I would not recommend, more on that in a minute).  I am now also taking something called PectaClear, which is a fruit pectin that apparently helps to absorb and remove heavy metals from the digestive system.  But as I started chelating, my lead levels continued to rise, along with those of other chemicals:

One hypothesis from my doctor was that the test results were skewed because she had given me more chelation agent before the second test (due to weight gain).  That seemed like a pretty lame explanation and, frankly, unconvincing.  I was also losing my hair in fistfuls, likely due to the fact that chelation was also drawing the iron out of my system.  I was exhausted and balding – not a good place.  So my whole family and I started researching like crazy.  We learned the following things along the way:

After making all of these changes, my doctor and agreed to wait six months before testing heavy metals again.  I was so, so crazy stressed about this topic that I knew I had to put my energy elsewhere for awhile.  During that time, my sister sent me a very interesting paper from the Canadian Medical Association Journal entitled Lead and mercury exposures: interpretation and action, which I’ve attached as a PDF for you here.  My biggest takeaways after reading this article were:

When I went back to see my doctor, I asked a lot of questions, but didn’t get many satisfactory replies.  I did, however, get a new heavy metals test without a chelation agent, and I received these results:

How about that?  I have no idea where the elevated Barium levels came from, in spite of reading up on it on the NIH website.  One of the main reasons people get Barium poisoning is from peanut butter, which I don’t eat.  But note how different the lead and and mercury levels are.  Sadly, without a baseline, it’s hard to really know what this means.  Either my earlier levels were related to one of the many things I changed (pans, supplements, salt, toothpaste, zeolite).  Or it was never that high to begin with, and the chelation agent was simply drawing out what is being stored in bones, fat tissue, or elsewhere.

What my doctor was able to tell me is that my current levels are likely as a result to past exposure (e.g. fillings, lead-based paint).  Knowing that, I am still attempting detox, but at a more relaxed pace.  I hope that this blog post will help raise your awareness of the importance of environmental regulations, and help you make better decisions as a consumer about what you buy for your kitchen, your personal hygiene, and more.

And now – after 18 months of tremendous anxiety on this topic – I know I am no longer dying of heavy metal poisoning, so I am actively turning my attention to other aspects of my health.  More on that in a subsequent post, hopefully before Thyroid Awareness Month is over!

← Origins of anthrodesign
I still have Hashimotos →

4 Comments on “It’s not just Flint”