[from an August 2015 mommy blog post, with minor edits]

We’re hooked – totally and completely hooked on this game, as evidenced by the fact that the highlight of our weekend so far has been killing the Wall of Flesh as a family.  We did it first in our oldest son’s game (after two weeks of actively trying!), and then again in our youngest’s.

The boys have been living, eating, breathing Terraria. My partner too.  I, unfortunately, have had to go to work.  When I went to our youngest son’s Curriculum Night for first grade, I had a chance to learn about what he’s going to do in school this year, and I had a see what was in his desk.  His personal whiteboard had Terraria characters on it: 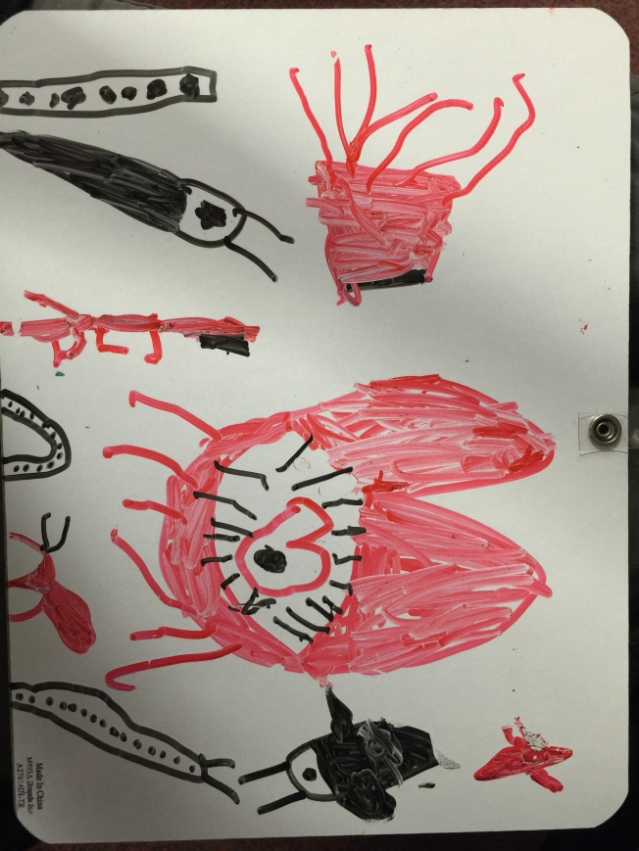 I also get occasional love notes with a Terraria theme: 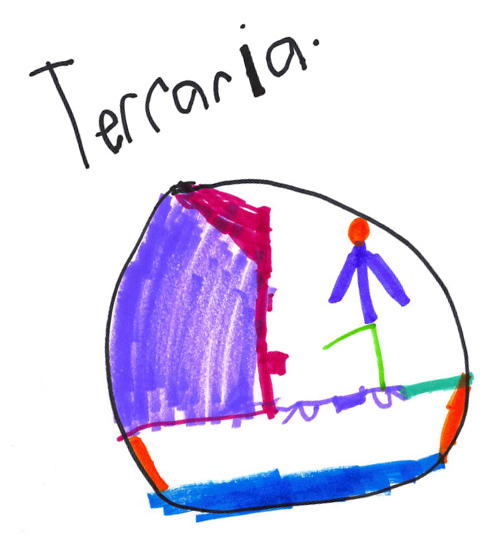 And my oldest drew an elaborate word search for me in a Lizhard Temple theme: 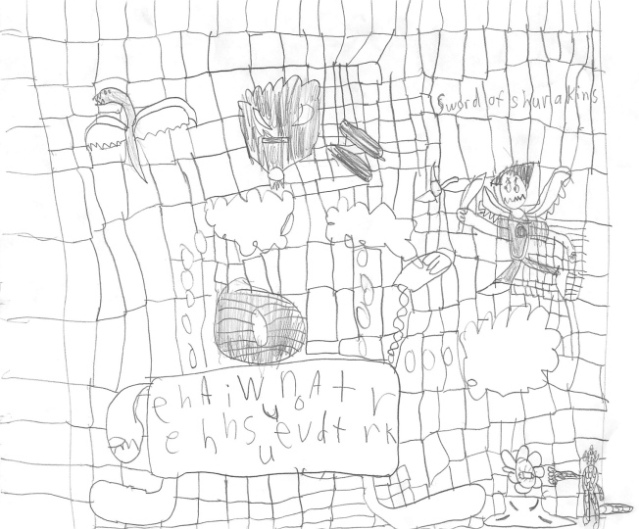 And, the boys have also been drawing the bosses at home, and using them to decorate through out the house.  Here is a picture of a wall in their bedroom: 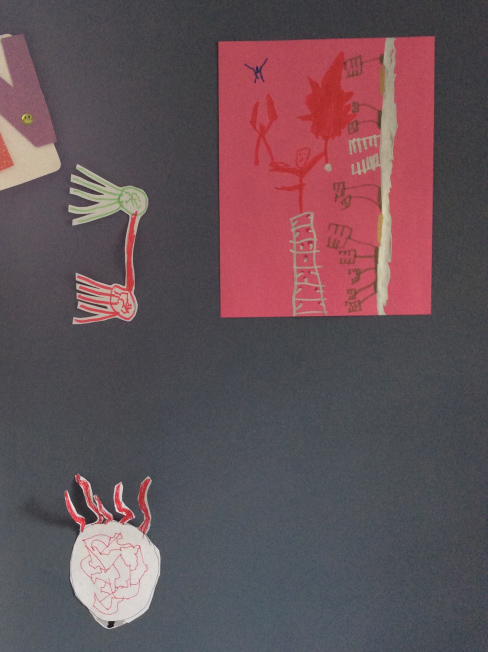 On the top left is The Twins, and below it the Eye of Cthulhu (which our oldest drew for his little brother).  On the top right side (on the pink paper) is our youngest’s picture of the Wall of Flesh. He explained that he is standing on one of the obsidian structures which exist throughout the Underworld.  He is fighting the boss with a Fiery Greatsword, with me standing behind him and his other mom in the far distance.  Magical, isn’t it?!

But wait – if you’re not equally hooked, this may not make sense!  So let me explain.

Over the summer, our oldest had a counselor-in-training who told him about a new game called Terraria.  Better than Minecraft, he said. We were skeptical. After all, haven’t we logged hundreds of hours on Minecraft, purchased our own Realms, and bought our oldest a Minecraft modding package for his 8th birthday?  Yes, yes we have!  So what could be better than Minecraft?!

In fact, at the beginning, I made a lot of comparisons to Minecraft.   You dig into the landscape and discover ores.  Once you create (or in the case of Terraria, discover) a bed, it becomes home base. Like Minecraft, there is also the regular rotation between day and night, with the nighttime bringing more challenging enemies.  In Terraria there are waves of zombies and goblins which require you to build structures and defend yourself, and other creatures (like werewolves) once you get into Hard Mode.   You can collaborate with other players, or compete against them in player-versus-player (PVP).  In our house (with the boys being 8 and 6), we focus on collaborative play.  It was one of the aspects of Minecraft that we appreciated the most – cooperating to build structures and advance an imaginary cause (either with or without bad guys).  Managing, guiding, coaching them on appropriate behavior is how we found ourselves equally hooked on the game, I think!

Here is a family portrait in front of our oldest son’s home structure, with all four of us geared up and ready for battle: 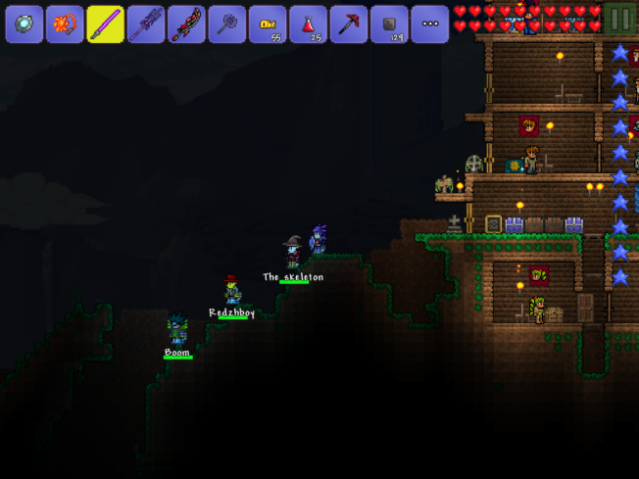 From left to right, my partner, my two boys, and me in my purple armor.  I have strong crimtane armor underneath, and purple vanity items on top (both were a gift from the boys).

Each game has it’s own unique landscape and different biomes, and some vary by game (you might have a purple Corruption in one game, and red Crimson in another).   The landscape is not infinite (at least not in the iPad version); Terraria has a defined left and right edge, usually with a sea on one edge and a pink Dungeon structure on the other.  Each game also has a defined top edge (games have one or more a Sky Islands) and bottom (Underworld).  The game allows you to zoom out so you can get a birds eye view of all the areas you explored.  Here is a view into one of my games, where I have explored, left to right, the Corruption, the area around my house (where all the NPC heads are stacked), and the jungle biome (on the right).  I have also been through part of the Underworld (in bright red at bottom), in preparation for killing the Wall of Flesh, which spawns there: 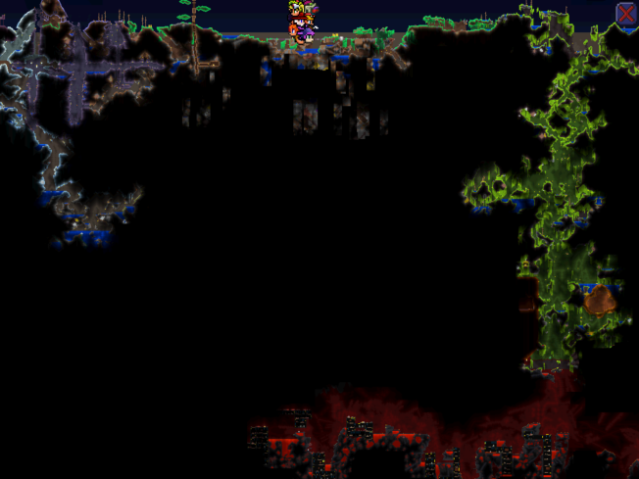 Another random difference is the weather – Terraria has rain and occasional snow flurries.  In Minecraft Pocket Edition, the weather doesn’t change (at least, it didn’t at the time!) the way it does on the desktop or PS3 version.  My professional self can’t help but wonder if Terraria learned from early Minecraft engineering mistakes and made different choices about the game design as a result.

Besides those obvious similarities and differences, there is definitely something special about Terraria.  It definitely has more game mechanics in play than Minecraft – there is a notion of forward progress and leveling up that makes it super addictive!  You build shelters for yourself as well as new characters (NPCs) that continue to join as you create new structures.  The first one is a Guide which helps you understand what activities to engage in next.  The NPCs require not just a roof and walls, however – they need a workstation (or table) and chairs, as well as light through torches or other lights.  In turn, the NPCs provide you with new workstations (e.g. the Witch Doctor provides you with an Imbuing Station) that you can buy, and new objects to trade.  My youngest son and I seem to really enjoy the creation of our own spaces.  Here is a picture of my main structure (with smoke throughout because he set off a smoke bomb): 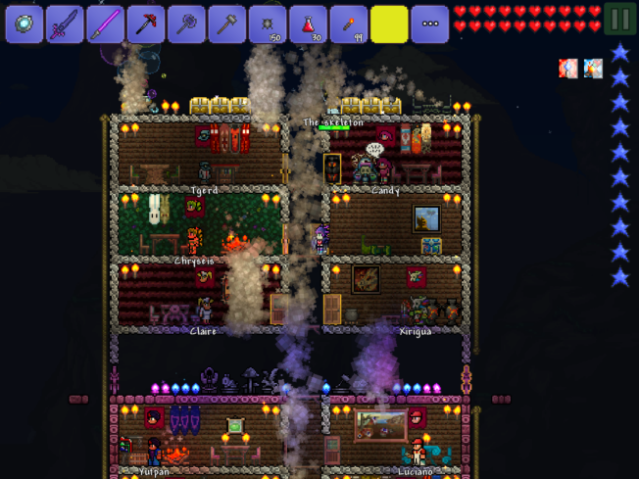 And here is a picture of his main structure, which is an elaborate, multi-level structure with all the decorations imaginable – 20 disco balls, paper lanterns, gem-laden walls, art pillaged from the dungeons of various games, and more: 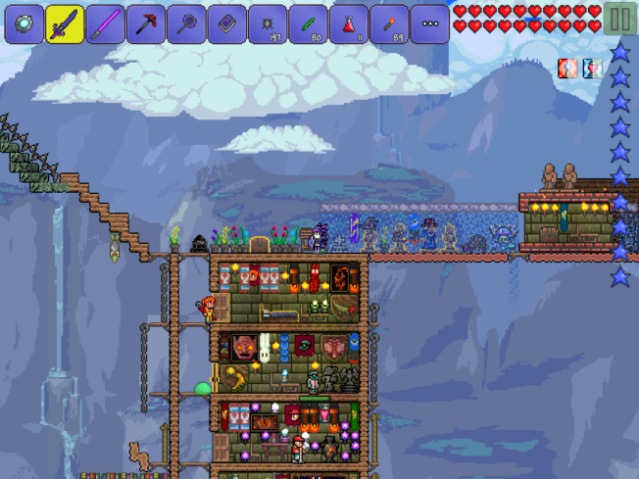 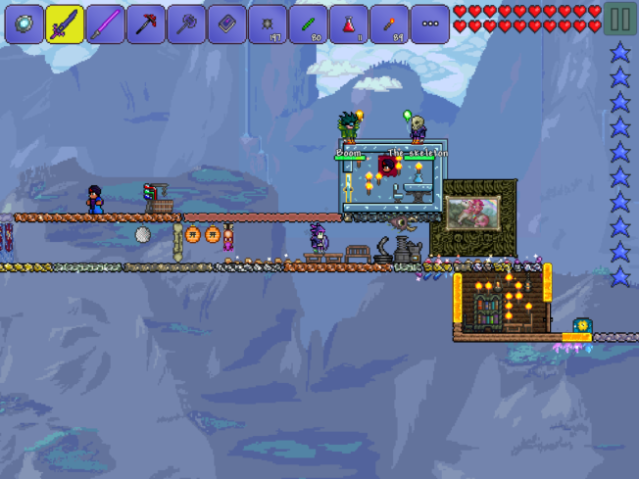 Our oldest describes it as Terraria having ‘more things’.  Through your travels you collect weapons, banners, badges and trophies.  These enable you to fight an increasingly challenging array of bosses.  That is, there are bosses to battle (not just mobs), there are lots of weapons and other treasures to discover.

Which brings us back to the Wall of Flesh, which is the biggest boss in pre-Hard Mode.  Our sons (independently and with different members of the family) had defeated the four other pre-Hard Mode bosses in the weeks since summer camp ended.  Our oldest has been increasingly anxious to beat the Wall of Flesh, so one night before bed we opened the Terarria wikipedia and read about different fighting techniques.  Using a combination of techniques, we finally did it! 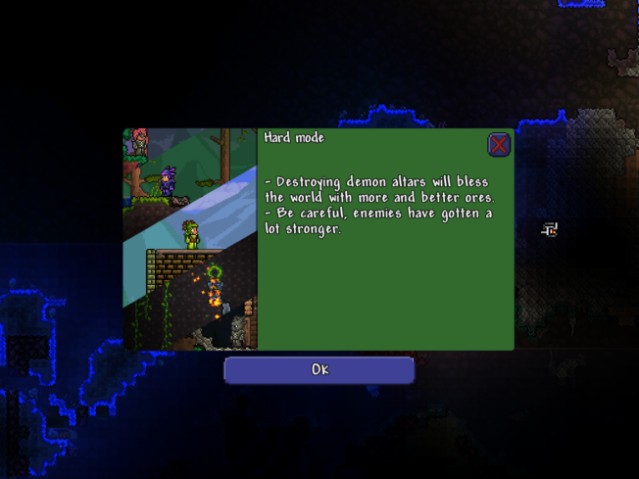 The boys are off and running in hard mode now.  Honestly they are exploring and discovering so fast, I’m not sure I can keep up!   I have been focused on building a beautiful, defendable structure for my NPCs, collecting all the ‘materials’ (with still unknown uses), and helping my family out when a Blood Moon requires all hands on deck.  I prefer the domestic aspects of Terraria.  And I have a job and a mommy blog to maintain, after all.  But my oldest just earned fairy wings, so I may just have to log in one more time to see if I can get those …

← Themes in Ethnographic Research
This is who we are →

4 Comments on “Hooked on Terraria”