When we moved from the Philadelphia area to Chicagoland late  last year, we moved into a house that’s about half the size of the one we left behind.  Our new place is a sweet little Dutch Colonial built in 1924, and it’s been almost completely redone inside and out.  But the reality is, I think the 1000+ square feet that we lost in the move must have been storage space!  We have some stuff in a storage unit, but our garage and attic are stuffed to the gills.

Some of you may be familiar with an A&E television show called Hoarders.  It is a fascinating and disturbing show about people who – usually due to depression or other mental health issues – find themselves collecting stuff uncontrollably, to the point where their home become unsafe and/or unsanitary.  Although our house is more or less in order, I am still feeling a little overwhelmed by all the stuff that we have that needs to be thrown out or given away.  Thus, it’s no surprise that I found this ecard particularly hilarious:

I am super organized, but there are moments where I fear the volume of stuff we have is going to get the best of me, and that I’m going to end up on an episode of Hoarders.  Yikes!

At the same moment that I’m working to discard or donate all of our extraneous stuff, I have really started to explore Pinterest in earnest.  For those of you that are not familiar with it, Pinterest is the latest darling of the social media aficionados.  Through the collection of pins (visual images accompanied by brief descriptions) onto boards, users are able to collect, curate, and share content they find online.  It brings together the best of sites like Flickr (photo sharing), Delicious (social bookmarking), Etsy (website and member-curated gallery of handmade items) and others.  At the same time, Pinterest has helped to define a new space that some are calling social shopping, which is enticing many companies to explore its potential as a new platform for product marketing.

Pinterest founder continues to find investors, and he and his team are having great success and visibility in the media.  The site has very quickly become a significant driver of traffic for online retailers, and it drives more traffic than Google+, YouTube, and LinkedIn.    In addition, “20 per cent of Facebook users (an impressive 2-million people) are sharing on inboards daily“.  It should be very interesting how they monetize what they are doing without irritating their users.

Here is a little window into my current Pinterest boards:

If I’m honest with myself, I can admit that it’s really a platform for digital hoarding.  So for those like me that are trying to clean up their act on the home front in real life, this platform is perfect!  Someone could probably do a psychological analysis on me based on the boards I’ve defined, the things I’ve collected, and my preponderance for things that I have categorized as Beautiful Things (357 pins), Funny (249 pins) or Quotes & Inspiration (232 pins).

Speaking of funny, there are a lot of snippets online which do use a metaphor addiction in talking about Pinterest.  Here are a few of my favorites: 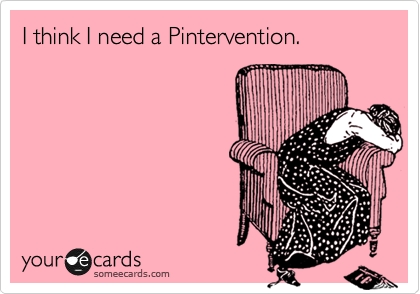 Besides it’s dangerously addictive qualities, there has been quite a lot of discussion about Pinterest on other fronts.  For example, there are lots of ways to pin images incorrectly, leading to a (often unwitting) lack of proper acknowledgement to people creating original or copyrighted content.   This has led to a flurry of blog posts (like this one) and discussions recommending that users abandon Pinterest.  The main concern is that the terms and conditions of Pinterest put the onus for those violations on the person doing the pinning.  The terms & conditions of the site have recently changed, but it’s not clear to me that those issues have been completely resolved.

I’ve also read some interesting posts about the gender distribution on the site, and the belief that its users are primarily women.  There have been some hilarious, true, and sometimes overstated remarks about that, including things like “Men are from Google+ and Women are from Pinterest“,  it’s “social networking for cat ladies”, and “Girls Gone Gluegunning”.  In an article called Pinterest’s Gender Trouble the author says:

There have been a few attempts at creating similar sites for men, including Gentlemint, Dart It Up and Manteresting.  There has been discussion elsewhere questioning whether such sites will ever have as much success for men as Pinterest has, given that women are inherently more likely to make lists and collect things.  I’m really not sure those stereotypes hold true, but it will be interesting to see how all of these sites – both Pinterest and its competitors targeted at a more masculine audience – will fare.

In the meantime, I’m going to continue to slog my way through mountains of bridal hairdos, wedding day floral arrangements and table decorations, and people’s fuzzy photographs of their own sloppy nail polish.  So, you can be sure that if I haven’t updated my blog it’s because I’m fervently pinning all the beautiful things I come across online and in my Pinterest feed.  Some of my other sites (like FaerieWigs) are also languishing because I’m more focused on consuming or collecting content than I am in making my own.  All those critiques aside, I am enjoying browsing, collecting, and curating nonetheless.  One of these days I’ll get back to writing and creating my own stuff again… after this one last pin – I swear it!