It’s the last day of Autism Awareness Month, and I’ve been ruminating for at least thirty days about what I should write.  At this point, so much has been written already.  I feel like what I can most contribute is my own experience in helping my son learn to manage his differences in a world that privileges a neurotypical perspective.  Some days I’m relieved to have a diagnosis to explain the challenges my son faces, but some days I’m also angry that my son is labelled for things that don’t seem that different to me. 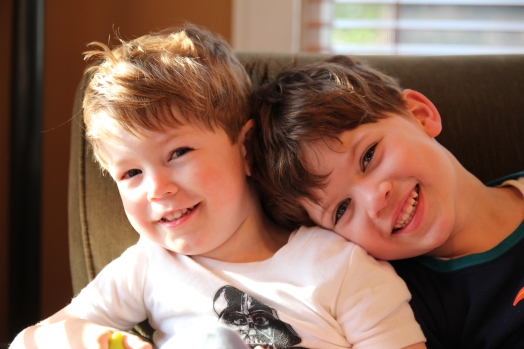 I remember the first time I heard the term Aspbergers in relation to one of my children.   It was about a year ago, and my partner had just started a new job so I went by myself to his Parent / Teacher Conference.  I had postponed the meetings a few times for various reasons, so I was surprised when I showed up at the school and both the Executive Director and the Director of Education were there to meet with me.  They expressed their concerns about his development.  They focused in particular on his social skills, but they also raised concerns about a variety of other developmental delays.  I remember blithely dismissing their feedback on his social skills, at first, but they persisted.  Many of the things they were describing didn’t seem that strange to me.  I grew up on ten acres in rural Connecticut, so for me playing by myself for hours at a time didn’t seem that unusual – it was, in fact, expected.  And my dad is a physicist and engineer who enjoys technology and takes his time building relationships with people.  At the same time, some of what I was being told resonated with me deeply, especially my son’s difficulty in interacting with his peers.  An hour later I left the daycare in tears, desperately fearful for my son’s future.

In the days and weeks following that meeting, I did all kinds of research and reading, and cried some more.  Although the daycare staff had their concerns about my son, mine were somewhat different.  I was worried that he bit his nails down to the quick – what could a three year old be so anxious about?  At Christmastime, he seemed to appreciate the predictability of the Advent calendar, and I realized how much he preferred routine and predictability.  But life, as we all know, is not orderly and predictable (as much as we try to provide that for our small children).  How could I help our beautiful, perfect little boy be successful in a world that was inherently stressful to him?

After a discussion with our pediatrician, I began to call specialists to get some more guidance, and finally selected Dr. James Coplan to evaluate our son.  I read Dr. Coplan’s book Making Sense of Autistic Spectrum Disorders, and prepared our family for a half day visit to his office.  That visit afforded us the chance to see our son’s behavior through the eyes of an expert, and get some very structured feedback about the social challenges he was facing.  It turns out he’s on the Spectrum … but just barely.  The diagnosis of PDD-NOS (Pervasive Developmental Delays – Not Otherwise Specified) ensured that Auden could receive a wide variety of social services.

As it turns out, we are quite lucky to have a teacher that was so attentive, because she recognized the signs well before many kids are diagnosed (around kindergarten or first grade).   In retrospect, I can say that I’m happy that our son was diagnosed when he was.  It allowed us to secure all kinds of specialized services for him in the past year, and he is headed to mainstream kindergarten in the Fall.  But I am still frustrated about the definition of normal.  I’ve come full circle now, and I still think he is perfect in every way.  He’s just not like everyone else.  He is smart and extremely focused – when he’s deeply engaged in something, other parents often watch him with wonder saying “I wish my kid was focused like that”.  He enjoys playing by himself or near us, but doesn’t need to be constantly engaged to be content.  He does have some food preferences, but what four year old doesn’t?!  He does like a certain amount of predictability and routine (as do I), and we struggle to find the balance between telling him about changes that are coming, and not wanting him to get too stressed out ahead of time.

So besides helping him understand the realities of life, the thing that I’m the most worried about is how is peers perceive and treat him.  I have watched him struggling to engage kids his own age, not understanding why he can’t connect.  As he gets older, I fear that he may be lonely or bullied.  In fact, the guidance we received from Dr. Coplan is that the most important thing we can do for our son at the moment is to preserve and cultivate his self-esteem.  It will give him courage to continue to learn, to try to bridge the differences between his world and the neurotypical one of most of his peers.  I can only hope that – as public awareness grows – they will meet him halfway, and without judgement.

As community members, as parents, as neurotypicals (if you happen to believe you’re normal!), we shape the perceptions of people around us, and particularly our children. I can only hope that we focus a little less energy on finding the genetic or biological basis for autism, and focus more on raising awareness of the wide range of social and neurological ways of experiencing the world.  And that we make room for them all.   In closing, a small example.  Before we moved from Pennsylvania, one of Auden’s teachers saw him as a behavioral problem in class, due to his apparent hyperactivity and difficulty in interacting appropriately with his peers (Aspbergers is often misdiagnosed as hyperactivity).  We were lucky that he was moved to a new room, and with a new teacher that recognized his Aspie tendencies.  In our new school system, his teachers saw that he was struggling to sit still in circle time.  They tried to put him in a chair that would (in effect) create the necessary physical space between him and his peers.  But he was squirmy and uncomfortable, so they tried a rocking chair.  Lo and behold, the kid can rock during circle time, so he’s able to get that little bit of repetitive movement that he needs to be focused and attentive.  A small thing, but hugely important both for the classroom dynamic and his sense of self-worth.  It rocks.  As simple as that.

← My next job
Forget Normal →